Letter of Intent for the Hollywood Chamber of Commerce

My name is Olivier Wright, I'm writing to you to ask for permission to show a shot of the Walk of Fame Stars in my first film, Ψ (“psi”). I hope to show you below why the stars are essential to the film and in turn how the film showcases them among a large collection of world-renowned works of art and architecture.
I started this project 4 years ago as a personal passion project. I didn’t know what it was going to become, I was simply travelling with my camera in hand, taking pictures of things that I found inspiring. The stars on the Walk of Fame had always been an intriguing place for me, as they were not only celebratory of successful film industry individuals, but were also permanent marks in the real world of people who weren't physically there anymore.

I have self-produced the film ever since and slowly edited together a feature film with interviews I conducted with prominent American intellectuals. The reaction I've had from the small circle of people who've seen it has been overwhelmingly positive. Philosopher Dan Dennett has called it "a mind-opener", astrophysicist Bob Doyle called it "dazzling" and psychologist Barry Schwartz had this to say: "Olivier has made an extraordinary film. It is deep in its reach and implications, yet at the same time, wonderfully accessible. It is just spectacular."

In the hope of reaching an audience and attracting a distributor, I have been contacting all the artists in the film to ask for permission to show the film non-commercially in 3 cases: These 3 ways can help attract a distributor who would be interested in buying the film, in which case all the artists and copyright holders would have to be paid commercial rights. And if such an opportunity doesn't arise, this permission would at least make the film available to interested audiences and introduce artwork and architecture to people in a new way, without making any money.

So far, I have been granted this permission for almost all of the artwork in the film, from some of the most renowned artists in the world such as Sir Anish Kapoor, Alexander Calder, Sir Antony Gormley, Arman, Roxy Paine and many more (you can see some of them here). As things stand in the current edit of the film, the stars of the Hollywood Walk of Fame are part of this collection.

Which is why I am reaching out to you today. First to apologize for not having had the foresight to ask you earlier, and second to ask you if you'd be willing to grant me this same permission to include the footage in the film for non-commercial purposes as I continue looking for distribution. The film is non-political, non-controversial, and I am currently holding a Kickstarter Campaign to finalize the post-production and raise some awareness about it (of course the Walk of Fame is not mentioned anywhere in relation to this project).

Please find below a presentation of why the stars of the Walk of Fame are essential to the film and how in turn the film showcases them as part of a collection of major artworks throughout the 5 cities of the film.
Why the Walk of Fame stars are essential to the film
The main voice in the film, Natalie, is a psychologist who travels to parallel worlds to meet alternate versions of her patient. But she is also struggling with her own past choices, in particular the fact that she gave up on her dream of becoming an actress. Midway through the film, we enter a dreamlike sequence (the rest of the film isn't like this) in which Natalie meets herself in another life where she has actually made it and become a famous actress. As you can see in the extract below, the sequence begins by diving into Anish Kapoor's beautiful work of art "Turning the World Upside Down" (located in Jerusalem) and then as Natalie tells of her encounter with her "other self," we float above The Walk of Fame and then above the prints of the TCL Chinese Theater (I shot and flipped the stars so as to avoid any attention drawn to the actual names on them).

​The stars on the Walk of Fame link back to the main character's core conflict, which is also to have been torn about which life to pursue, given his lifelong dream of being a filmmaker. Earlier in the film, we see him as a child playing on the beach with prints in the sand (linking to the TCL prints) but also finding a starfish - foreshadowing the Walk of Fame stars.
Generally speaking, stars are an important leitmotif throughout the film. First because they represent the physical stars in space, from which we learn much about our place in the universe (originally, Einstein had hints of quantum effects by observing stars). And also because they are the cultural symbols of success. And so throughout the film we have sightings of stars which, by connecting the different locations, serve to highlight one of the final messages of the film: wherever life takes you, whether it is Los Angeles or Jerusalem or London or anywhere else, there is beauty and meaning to be found if you take the time to look for it.
But the Walk of Fame is significant for another reason, related to its actual meaning, because this film itself is a love letter to film making and the real magic it offers audiences. Cinema is not just entertainment: it’s an actual space-time machine, the only one we have, to live another life and wonder: how would it feel to be that person or to live that experience? The Walk of Fame represents an industry that allows people to go and experience other lives - and this is the whole point of my film.
As I hope this film can contribute to cultural exchanges, I intend the credits to include a picture of each artwork and its location. In this case, it would look like this: 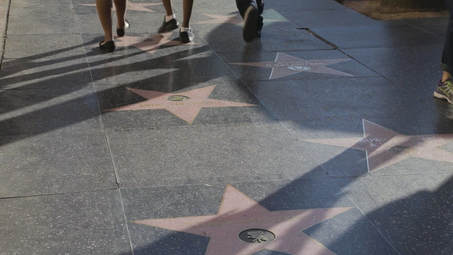 The Hollywood Walk of Fame
N Highland Ave & Hollywood Blvd, Los Angeles, CA 90028
The Hollywood Chamber of Commerce
www.hollywoodchamber.net
The Hollywood Chamber of Commerce logo could also be displayed. Furthermore, I intend to create a section on the film's website where the full collection of artwork and architecture in the film will be elegantly presented, with a bio of their author and links to their website/gallery/offices, to encourage viewers to learn more and visit each of them further.

I hope you can allow me to include this footage in the film for the non-commercial uses stated above as I continue my efforts to find a distributor able to finance all the commercial rights.
Feel free to contact me for any further information. I will be in Los Angeles from Thursday 22 to Monday 26 of March and would be happy to meet anyone at the Hollywood Chamber of Commerce who may wish to speak with me about this project.

​Thank you for your consideration,
Olivier Wright
olivierwright@gmail.com
+33.(0)6.51.53.53.62.
Here I have made the current edit of the film available to you. Please keep confidential.
Password: psi092017​