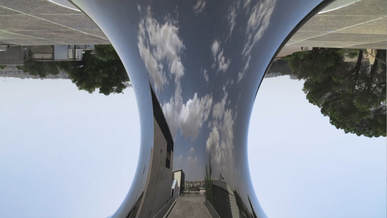 In the film, we meet five alternate versions of the same character, having all branched out through their decisions from a common past and now each leading a different life in a different city: Paris, London, Jerusalem, Helsinki and Los Angeles. But Natalie is also struggling with her own past choices, in particular the fact that she gave up on her dream of becoming an actress.

Midway through the film, we enter a dreamlike sequence (the rest of the film isn't like this) in which Natalie meets herself in another life where she has actually made it and become a famous actress. In the extract below, we dive into "Turning the World Upside Down" as Natalie tells of her decision to go and find her "other self", with the reflection acting both as a representation of a parallel dimension, but also of her own mind. We then float above The Walk of Fame and the TCL Chinese Theater prints in Hollywood (stars and prints are also important leitmotifs throughout the film).

​Reflective artwork is a leitmotif throughout the film, conveying the inherent paradox of distorting mirrors: they give us a glimpse of another world, letting us imagine how different things could be, but are still reflections of ourselves, ultimately showing us who we really are.
As you will see below, the artwork slowly emerges out of out of a chaos of white noise and ethereal sound effects. One of the themes of this film is that order comes out of chaos. The white static noise is a representation of randomness and the sounds are a mixture of the following elements: With these sounds, “Turning the World Upside Down” let’s us experience the birth of a universe and the origin consciousness.
Finally, this artwork is essential for one final reason: this is the turning point of the film. Indeed, the whole film is designed in a mirror-like fashion: the first half of the film presents problems, the second half solutions; and everything either side of the center is in reflection (Acts 2 and 3, Acts 1 and 4, the first and last shot). “Turning the World Upside Down” serves here as the center-point, the mirror in the film’s structure, and therefore a center-piece in the film's visual structure.
Given that this film can contribute to cultural exchanges and encourage people to visit the artworks themselves, the credits will include a picture of each artwork and its location. In this case, it will look like this: 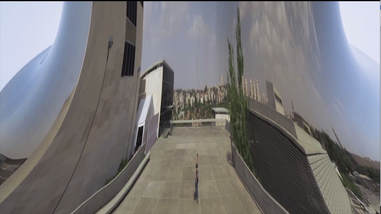 Turning the World Upside Down
Sir Anish Kapoor
The Israel Museum, Jerusalem, Israel
www.anishkapoor.com / www.imj.org.il
As a part of this film, "Turning the World Upside Down" features in a beautiful collection of public artwork and architecture throughout the 5 cities of the film, of which you can see a list here. I will be making a section on the website where all the artwork is elegantly presented, with a bio of the artist and links to their website/galleries.