Letter of intent for Yad Vashem

My name is Olivier Wright., I'm writing to you from France to ask you about 2 works of art located at Yad Vashem that appear in my film project, to ask you for permission to include them in it. First, let me quickly present the project to you: four years ago, while studying philosophy at university, I began working on a passion project that has since steadily grown into a film called Ψ (or “psi”).
During my travels, I visited Yad Vashem and was amazed by two sights: Zadok Ben-David’s “For the tree of the Field is a Man’s Life” and the triangular skylight of the museum itself, designed by architect Moshe Safdie. At the time, I didn’t know what this project was going to become, I was simply travelling with my camera in hand, taking pictures of things that I found inspiring. Now, these two works are both essential parts of this film’s narrative and visual structure.

Zadok Ben-David’s “For the Tree of the Field is Man's Life” is the first work of art that we see, setting the tone for the rest of the journey, and instantly captures the whole concept of the film. Indeed, the figures of the tree fade in from a clear blue sky and as we scope the blooming connection of bodies, the narrator says: “From one, I found many. From many, I found five.” ​

​This sculpture thus looks almost like a map of all the possible lives a person could live, and this is what the film is about: a quest to understand our place in the universe and the nature of human freedom. The opening quote of the film from Jorge Luis Borges’ famous work, The Garden of Forking Paths:

​“I sensed that the garden that surrounded the house was saturated infinitely with invisible persons. Secretly – busily at work – in other dimensions of time.”

This sculpture is a beautiful representation of the interconnectedness of the different paths we could be living, and as such is the centerpiece of the film’s main leitmotif: gardens and tree-like structures. Indeed, throughout the film, we journey across other works of art exploring nature and growth:
This is one of several leitmotivs in the film which, by connecting works of art in different locations, serve to highlight one of the final messages of the film: wherever life takes you, whether it is Jerusalem or London or Paris or anywhere else, there is beauty and meaning to be found if you take the time to look for it. 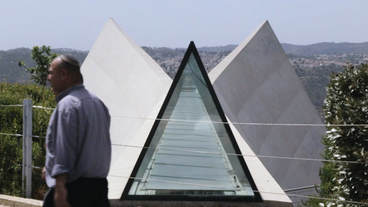 The triangular-like skylight on top of the Yad Vashem Museum itself, designed by architect Moshe Safdie appears towards the end of the film in a sequence where the narrator draws a parallel between the possibilities of quantum randomness and the power of stories, with which you can imagine all different paths in life.

The Yad Vashem skylight is the last piece in a leitmotif carried throughout the film on triangular and pyramid-like structures, such as:
These similar shapes in different works of architecture symbolize this quantum notion of superposition of different possible states, but more importantly still, they find root in the main character’s childhood and the beach where he spends his summer days, where the rocks have a distinctive pyramid-like formation.
I have been in touch with Zadok Ben-David who supports the project and has granted me permission to include his work in the film. I have not been in touch with Moshe Safdie. The film showcases a collection of almost 80 works of art and architecture accross the 5 cities, from such artists as Alexander Caldez, Sir Antony Gormley, Sir Anish Kapoor, Eila Hiltunene, and many more - you can see the full list here. I hope you'll allow me to include Zadok Ben-David's tree and the Yad Vashem pyramid in this collection.

Given that the film will encourage people to visit these places themselves, I intend the credits to include a picture of each artwork and its location. In this case, it would look like this:
The Yad Vashem Logo could also be included.

Feel free to contact me for any further information. Thank you for your consideration,
Olivier Wright
olivierwright@gmail.com
+33.(0)6.51.53.53.62.